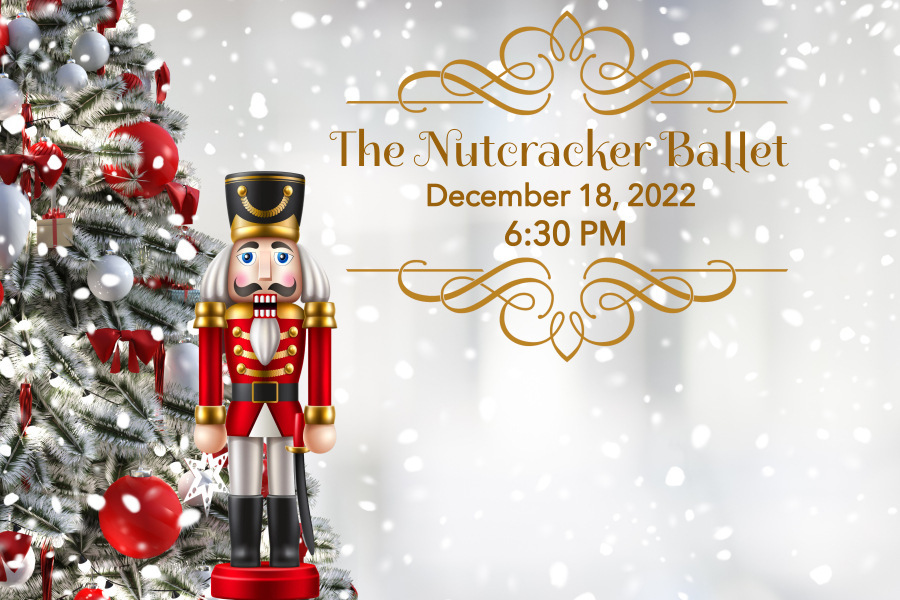 The Nutcracker Ballet is based on the story “The Nutcracker and the King of Mice” written by E.T.A. Hoffman.  Although what is seen on the stage today is different in detail from the original story, the basic plot remains the same; The story of a young German girl who dreams of a Nutcracker Prince and a fierce battle against a Mouse King with seven heads.

When Marius Petipa had the idea to choreograph the story into a ballet, it was actually based on a revision by Alexander Dumas, a well known French author.  His version reflects more of what we have come to love as the Nutcracker Ballet.
The Party Scene

It is Christmas Eve at the Stahlbaum house — A large and grand house with the most beautiful tree imaginable.  The Stahlbaums are hosting their annual Christmas party, welcoming the arrival of their family and friends.  The children, Clara and Fritz, are dancing and playing as they welcome their friends too.

The party grows festive with music and dance as godfather Drosselmeyer arrives.  He is a skilled clock and toy maker and always full of surprises. Drosselmeyer draws everyone’s attention as he presents two life-size dolls.  They are the delight of the party, each taking a turn to dance.

The children begin to open gifts when Drosselmeyer presents his to Clara and Fritz.  Although his gift to Fritz is quite nice, he gives Clara a beautiful Nutcracker that  becomes the hit of the party.  Fritz becomes jealous and, having a bit more spunk than a boy should have, grabs the nutcracker from Clara and promptly breaks it.  Clara is heartbroken looking on as Drosselmeyer quickly repairs the Nutcracker with a handkerchief he magically draws from the air.

As the evening grows late, the guests depart and the Stahlbaum family retires for the evening.  Clara, worried about her beloved Nutcracker, sneaks back to the tree to check on him, falling asleep with him in her arms.
The Fight Scene

As the clock strikes midnight strange things begin to happen.  Clara begins shrinking as her beautiful Christmas tree grows high above her.  The toys around the tree come to life while the room fills with an army of mice, led by the fierce Mouse King.  As the Nutcracker awakens, he leads his army of toy soldiers into battle with the mice.  The Mouse King corners the Nutcracker and battles him one-on-one.  The Nutcracker seems to be no match for the Mouse King.

The Nutcracker and his army can go on no longer and are captured by the mice and their King.  Clara makes a final daring charge throwing her slipper at the Mouse King, hitting him square on the head.  The Mouse King drops to the floor and the mice run away, carrying off their leader’s lifeless body.

The Land of Snow

The Nutcracker turns into a Prince and takes Clara on a journey to the Land of Snow, an enchanted forest wonderland  where they are welcomed by dancing snowflakes.
The Land of Sweets

The Prince escorts Clara to the Land of Sweets where they are greeted by the Sugar Plum Fairy.  The Prince tells her about their daring battle with the army of mice and she rewards them with a celebration of dances.

As a finale, the Snow Queen Dances a beautiful solo for Clara and the Prince.
The Dream Ends

Clara awakens from her dream and finds herself by her Christmas tree with her beloved Nutcracker.

This year’s productions are being held at Plymouth Whitemarsh High School Auditorium.  The address is 201 East Germantown Pike, Plymouth Meeting PA 19462.  The auditorium entrance is the main front entrance into the high school.  The performance will be held on December 18, 2022 at 6:30PM.  Tickets start at $20 for adults and $10 for children ages 12 and under.  Ticket sales begin on December 1st at 5:00 PM and can be purchased using the link provided in the details!

Dress Code: Dressy Casual; assigned seating, be sure to bring your ticket!